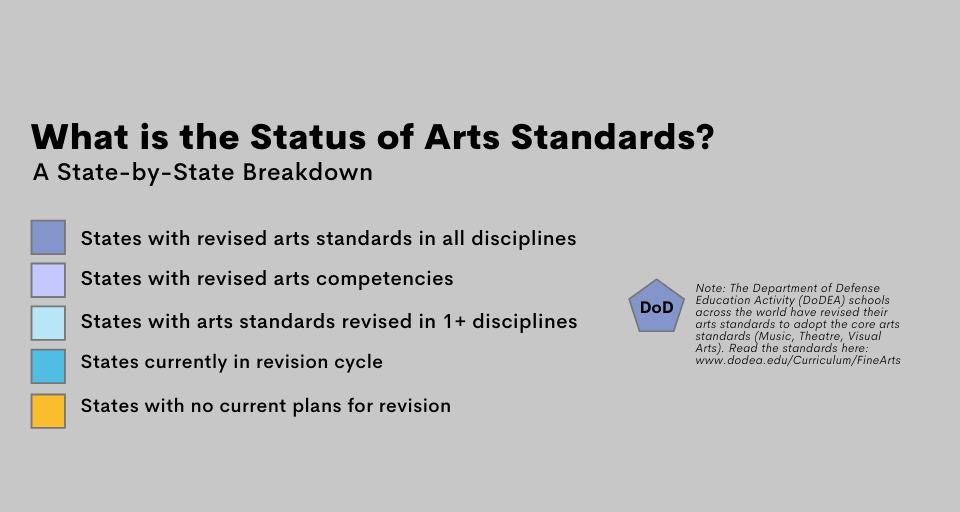 Since the June, 2014 release of the National Core Arts Standards, twenty seven states and the Department of Defense have adopted revised arts standards in one or more arts disciplines. An additional state, New Hampshire, has updated Arts Competencies for its schools. Currently, ten states are in the process of revising their state arts standards. Some states have adopted the voluntary national standards as their own, other states reviewed or made changes to their standards employing the National Core Arts Standards as one of their revision sources. Many states have acknowledged the emerging art form of media arts by adopting standards for education in the media arts as a part of their revision processes. As of January 31, 2018, of the states who have revised their standards or competencies, twenty two have added standards for media arts education and an additional three other states who are in the process of revising will be including media arts standards.

In many ways, the standards revision process can serve as an intersecting point of dialogue and communication as communities reﬂect on what it means to have access to a high quality education in the arts and why it is important. The creation of the National Core Arts Standards themselves prompted deep and meaningful conversations among the member organizations that created them and the more than 130 arts educators and 6,000 reviewers who participated in their creation. In turn, the publication of these voluntary National Core Arts Standards can prompt a rich dialogue between students, educators, administrators, policy makers, parents and community members about access and advocacy for the arts to ensure artistic literacy for all.

Read the complete report, The Status of Arts Standards Revision in the United States Since 2014.